History of the Thomson Dam

With a capacity almost four times that of Melbourne's next largest reservoir, the Thomson Dam was designed as a drought reserve — to be built up in wet years and used in dry years.

On 31 July 1984, the newly-built reservoir was officially included in Melbourne's total water storages, more than doubling storage capacity. Still virtually empty when factored in, its size dragged down the city's storage levels from 65% to 26% overnight. It has been full three times: 1992, 1993 and 1996.

Storage and inflow over the years

The commonly-held notion that Thomson would 'drought proof' Melbourne was severely tested in the 1997 to 2009 Millennium Drought, when record low inflows led to its storage levels dropping from full to just 16% of capacity in mid-2009.

It then recovered with help from exceptionally high rainfall in 2010 and 2011 — Australia’s wettest two-year period on record. This allowed the Thomson to ‘rest and refill’ while it was kept from supplying Melbourne, with other parts of the water supply network providing water instead.

The following graphs show how much water has flowed into Thomson since 1984 and the corresponding storage levels over this time, including the effect of the below-average inflows from 1997 to mid-2009.

The light blue bars show how much water has flowed into Thomson each year since 1984. The dark blue lines show how the average has changed in the past 14 years — from a yearly average of 254 billion litres to 159 billion litres. It's a similar story with Melbourne's nine other reservoirs. 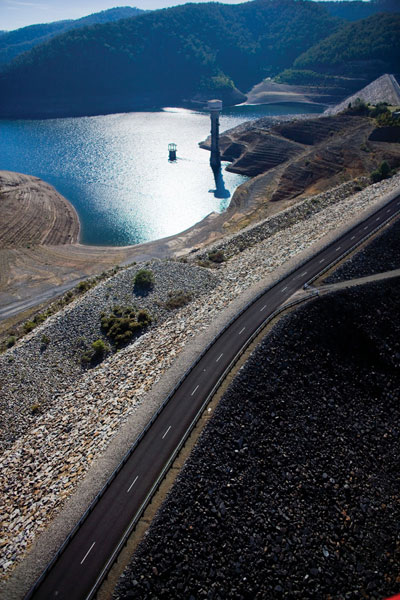 A video from the early 80s that gives an insight into the scale and importance of the Thomson Dam project during construction and upon its completion.

A video from the early 80s about what went into the construction of the Thomson Dam (Part 1).

How to build a dam - Part 1 - transcript

A video from the early 80s about what went into the construction of the Thomson Dam (Part 2).

How to build a dam Part 2 - transcript