Read about the sewage treatment process at the Western Treatment Plant, which produces 40 billion litres of recycled water.

The Western Treatment Plant treats sewage using a series of large ponds, called lagoons — the largest of which can hold 600 million litres. Sewage flows slowly through anaerobic and aerobic lagoons, gradually becoming cleaner as bacteria break down the organic material in the water.

The Western Treatment Plant also produces Class A water, the highest standard of recycled water, and was the first plant in Victoria to do so.

The first lagoons have large plastic covers about four times the size of the MCG, which are designed to keep out oxygen. This creates an anaerobic (no oxygen) environment where certain bacteria thrive.

As the bacteria decompose organic material in the sewage they produce odours and methane gas, which is captured under the covers. This reduces odour and greenhouse emissions and allows the gas to be used for powering engines that generate electricity.

Did you know the production of biogas (or sewage gas) enables the Western Treatment Plant to generate nearly all its electricity and be energy self-sufficient? Learn more about Melbourne Water's commitment to improving our energy efficiency.

Sewage then flows into uncovered aerobic ponds. Here, machines pump oxygen in the water to make it suitable for another type of bacteria, which removes nitrogen and clumps together in the process.

Solid clumps are easily separated from the wastewater once the sewage enters settling tanks, called clarifiers. The leftover solids are dried and stored in large piles, or reused as biosolids.

Check out what we're doing with biosolids, and Melbourne Water's commitment to minimising, reusing or recycling waste.

Once water reaches the final lagoon it has been thoroughly cleaned. It can then be released into Port Phillip Bay under strict conditions set by EPA Victoria to protect the environment, or treated further and recycled.

40 billion litres of recycled water is produced at the Western Treatment Plant, which is supplied to customers and used to water the plant’s pastures and wetlands. To reach Class A standard, ultraviolet light and chlorine are used to further disinfect the water. Some of this is used to water crops, parks and gardens, whilst some is further processed to reduce its salt before it can be supplied to homes.

Find out why recycled water is so important to Melbourne, with population growth and climate change creating a 'new normal' for our water storage levels. Discover more about the Western Treatment Plant, including its rich history and thriving ecosystem with an internationally recognised bird habitat. 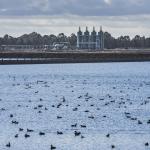 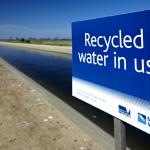 How Melbourne Water produces recycled water, following strict regulatory guidelines – and how it is a key initiative in securing our water supply.